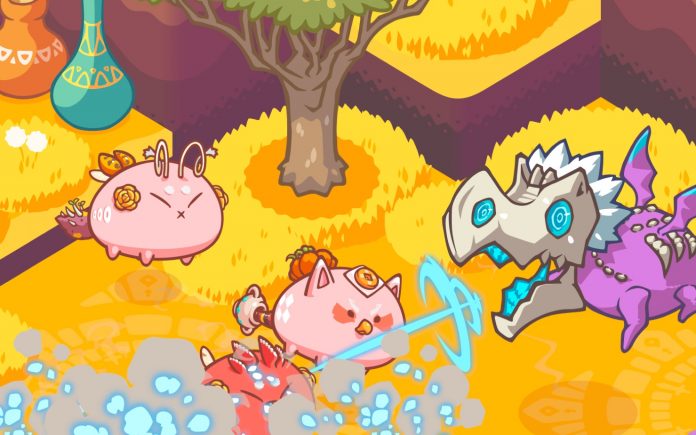 Axie Infinity is a virtual world called Lunacia in which players battle, raise and trade fantasy creatures called Axies. You need at least 3 Axies which can then be used to do PvE and PvP battles, and bred up to 7 times each, which gives a player new Axie (obviously).

The game can be found at the official axieinfinity.com website and it is one of the best known and most popular cryptogames. At their website you can also find the link to their Discord server, which is highly recommended for learning more details about the game.

There are two cryptocurrencies associated with Axies:

As of now there are three ways to earn in Axie world.

So what do I need to start playing Axie Infinity?

As stated on the beginning you need 3 Axies to start playing.

Unfortunately because of the high gas fees at the moment it costs more than 500$ to get the 3 of them. Breeding an Axie requires several wallet transaction, each of which charges a high ETH gas fee and pumps the price of newly bred Axies a lot.

These issues will hopefully be solved soon by introducing the “Ronin” wallet in the game. The Ronin wallet is an Etherium based side chain which should eliminate those high fees and bring the price of a single Axie to a reasonable level (around 100$).

Buying a Land in Axies is currently even more expensive, as the cheapest ones are around 1 ETH.

Another frequently mentioned feature is developers giving everybody 3 soulbound Axies. This will attract more users to the game and make it easier to start playing, but it is still unknown when it will become an option.

So… is there a way now to play the game without spending and money? Luckily, there is.

There’s a number of different scholarship programs in which current owners give you their Axies so you can play the game. You can start playing and farm the precious SLP coins, but you have to split the earnings (around 50-50%) with the real owner.

All about that can be found at the official Axie Infinity Discord server, where the welcoming community will gladly help you out and get you started playing and earning.