Explorers! It’s week 50 of the Featured Creatures Event, and this week we got some fliers to dart! While the fliers themselves don’t have that much of an impact in the meta, they are required for quite the large amount of hybrids! Let’s go over them and find out what to dart! 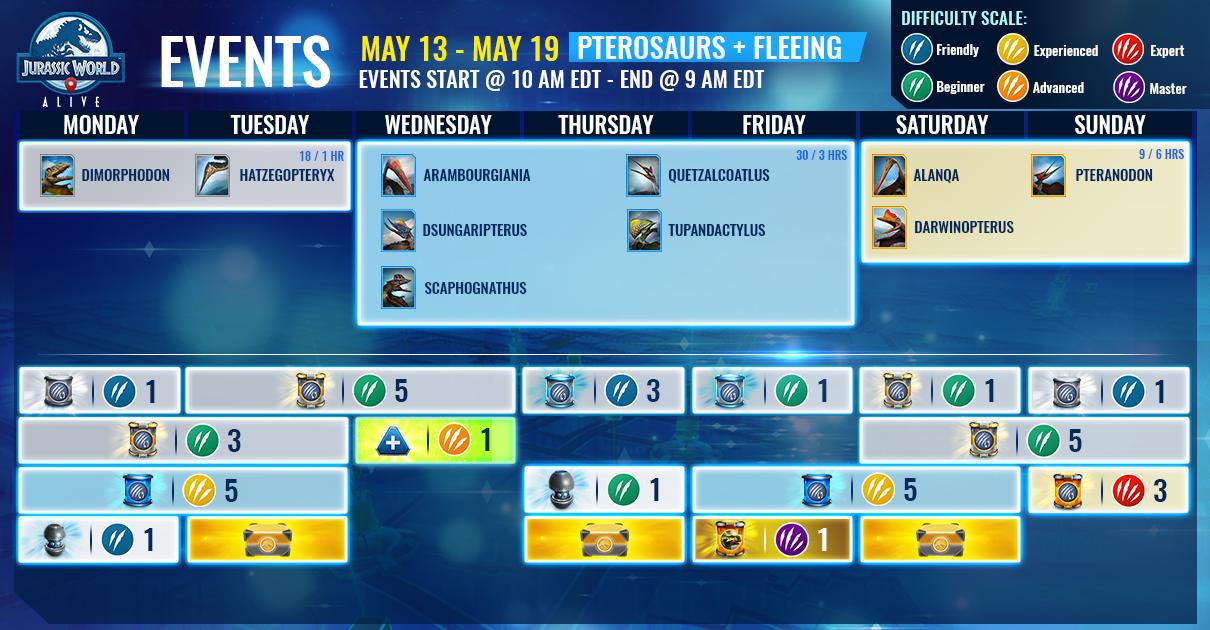 This week, we got pterosaurs as the Featured Creatures, and the Strike Events contain dinosaurs from the Fleeing pool. No tournament this week though. Maybe Ludia is going to work on them a bit to iron out the last few bugs that were in it? We don’t know, but we’d like to see the tournaments return, they are a lot of fun! But for now, let’s get into the Featured Creatures!

Which Pterosaurs To Focus On This Week:

For the Commons: Hatzegopteryx seems like the better choice of the two. Together with Darwinopterus, it makes the Darwezopteryx hybrid, which in turn makes Stygidaryx. Although not that great in the Arena, it is still something you should go for! Dimorphodon also has a hybrid: Dimodactylus, but it doesn’t perform that well in the Arena and Dimorphodon is more easily obtained due to Hatzegopteryx being a Daily Monday spawn. So our money would be on Hatzegopteryx.

For the Rares there’s a clear winner: Arambourgiania! It’s an Arena Exclusive with a Legendary and Unique hybrid in Koolabourgiania and Geminititan. Although the Unique Sauropod is a bit underwhelming, it’s still a great dinosaur to have, and with last weeks Diplodocus, you may have a shot at unlocking/fusing it! A case could be made for Dsungaripterus and Tupandactylus. Dsungaripterus isn’t available in the wild at all, so unlocking it wouldn’t be a bad choice. Tupandactylus still makes the Dimodactylus hybrid with Dimorphodon, and you could dart for it as Tupandactylus is now restricted to being a Daily Monday spawn. We think you shouldn’t go for Scaphognathus or Quetzalcoatlus unless you haven’t unlocked them yet. Both don’t have hybrids yet, so their DNA isn’t as valuable as the other ones. We’d recommend going for Arambourgiania with (almost) all your attempts!

Finally, we get to the Epics. To us at MetaHub, Darwinopterus seems like the best choice. It still has two hybrids, Darwezopteryx and Pterovexus, and Darwezopt also makes Stygidaryx. We have to say though that these hybrids aren’t the best in the Arena, but for unlocking purposes, we’d still say to go for Darwinopterus. A case could be made for Alanqa, as it makes the Alankylosaurus, but that one isn’t that great either. We wouldn’t recommend darting Pteranodon here, unless you got enough DNA for the other two pterosaurs to unlock their hybrids. It could get a hybrid in the future, so keep this in mind! It’s up to you which one you prefer.

This week we get Two Epic Strikes, one of which is Sinoceratops themed. Could this mean that the Themed Boss Strikes we got starting from last week will become a regular feature? We don’t know, but we certainly hope so! The other Strike Events are your standard Common and Rare Strike Events, and on Wednesday we get a Health Boost Strike Event! Make sure you get this one, it contains free Health Boosts!

To be honest, this isn’t the best week ever we’ve had with the Featured Dinos event. However, a lot of these pterosaurs still have hybrids, and this week is the best way to get a good amount of DNA for them! And the Fleeing Dinosaur pool also has a lot of great dinosaurs in it, so go battle those Strike Events! That’s all Explorers, happy hunting!

MNBrian - July 20, 2019
Explorers! There's been a migration! If you haven't noticed, it's been a little slow around these parts lately. Most of the MetaHub staff has moved over...